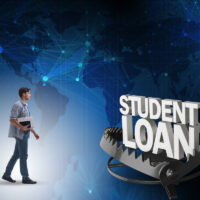 Historically, student loans are one of the most common forms of consumer debt that most people believe are not subject to discharge in bankruptcy.  We incur thousands of dollars of debt, if not hundreds of thousands, when we are barely old enough to drive.  Students attend for-profit schools that fraudulently over-inflate their employment statistics, leaving graduates deep in debt and underemployed.  In reality, student loans have always been technically subject to discharge, but the legal standard to qualify has been extremely high.  Recently, legislators, government officials, and courts have begun to (correctly) view this situation as unjust, and the standard appears to be gradually relaxing.  Continue reading to learn about discharging student loans in bankruptcy, and reach out to a passionate Southern California debt relief attorney for help with student debt and other financial hardships.

Unlike other forms of debt, student loans are not automatically dischargeable in bankruptcy.  In order to discharge student debts, the debtor must prove that it would be an “undue hardship” to continue to require repayment.  Courts generally apply what is known as the “Brunner” test to determine whether a debtor qualifies for “undue hardship.”  Under the Brunner test, you may discharge student loans if you satisfy three factors:

The Brunner test is a difficult test to meet, even for people facing bankruptcy.  While it is not the only test employed by bankruptcy courts, it is the most common, and the others are not much less forgiving.  Moreover, you will have to go through an adversarial process, arguing against the creditor to prove your side.  Thankfully, times are changing.

Hope for the Future

A recent case out of New York illustrates how courts are becoming more forgiving with student loan debt.  A U.S. Navy veteran sued for the discharge of more than $220,000 of student loan debt from law school.  The bankruptcy court in Poughkeepsie found that satisfying the debtor’s law school debt would pose an undue hardship, even though the court did not find that the debtor was disabled or unemployable.  The original undue hardship test does not require a person to be destitute and physically incapable of work, as some courts and creditors seem to believe. Rather, the question is whether repayment would prevent them from keeping a minimum standard of living for the foreseeable future.  In this case, the judge found that it would.

According to a Wall Street Journal article, of the roughly 250,000 student loan borrowers who file for bankruptcy each year, only 400 or so sue to make a discharge request.  While discharge of student loan debt is still rare, it is becoming incrementally easier each year.  The federal administration is currently looking at policy changes in the Education Department, which might help with student loan forgiveness.  Many of the Democratic presidential candidates have vowed to attack the problem of student debt head-on, should they be elected.

If you are facing crippling student loan debt, you might have a better chance at a discharge than conventional wisdom would have you believe.  Call a knowledgeable and dedicated California bankruptcy attorney to evaluate your circumstances and help you get out of debt.

If you’re struggling with student loans or other debt and considering bankruptcy, please contact Rounds & Sutter for a free, confidential consultation.  With offices in Ventura, Santa Barbara and Westlake Village, we represent clients throughout Southern California, offering smart, compassionate legal counsel in the face of life’s challenges.